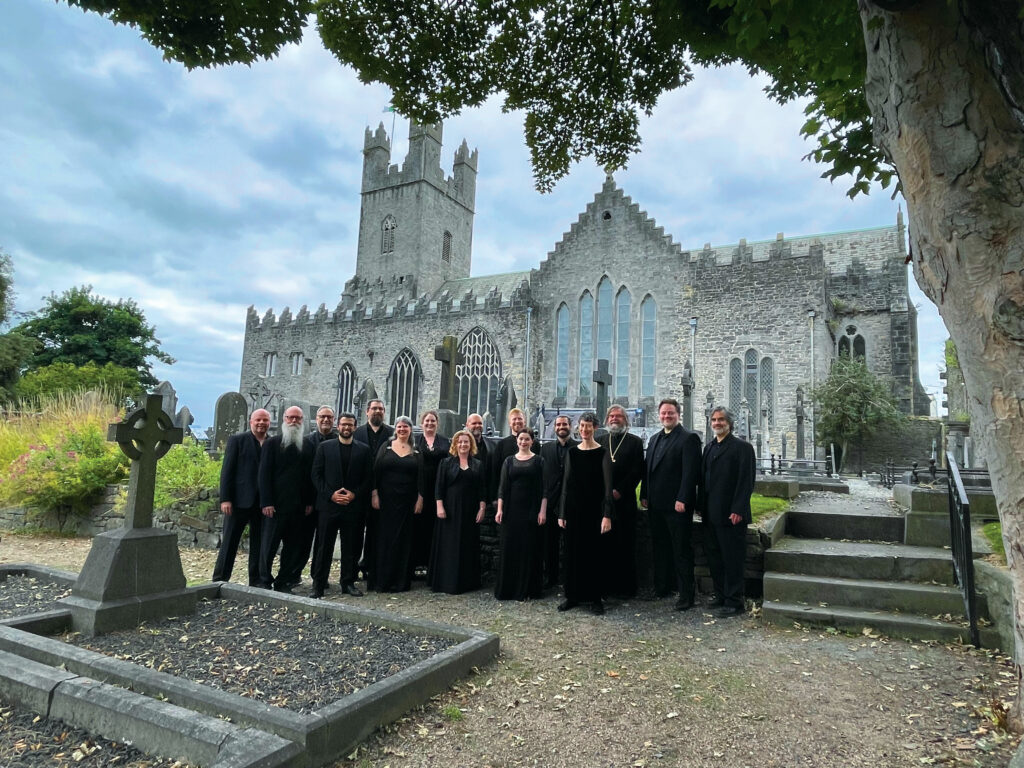 Cappella Romana is a professional vocal ensemble that performs early and contemporary sacred classical music in the Christian traditions of East and West. The ensemble is known especially for its presentations and recordings of medieval Byzantine chant (the Eastern sibling of Gregorian chant), Greek and Russian Orthodox choral works, and other sacred music that expresses the historic traditions of a unified Christian inheritance.

Cappella Romana brings to life music that meets a deep human need, not only to belong and to have a shared creative experience, but to feel the full range of ethical, emotional, and spiritual effect as expressed through music. We strive to give an experience that allows you, our audience, to feel a sheer joy that cannot be contained by mere words, but through the ineffable sounds of the human voice in song.

Cappella Romana is a vocal ensemble dedicated to combining passion with scholarship in its exploration of the musical traditions of the Christian East and West, with emphasis on early and contemporary music.

Our vision is to give a glimpse of transcendence through the music of the Christian East and West.

Founded in 1991, Cappella Romana’s name refers to the medieval Greek concept of the Roman oikoumene (inhabited world), which embraced Rome and Western Europe, as well as the Byzantine Empire of Constantinople (“New Rome”) and its Slavic commonwealth.

Flexible in size according to the demands of the repertory, Cappella Romana has a special commitment to mastering the Slavic and Byzantine musical repertories in their original languages, thereby making accessible to the general public two great musical traditions that are little known in the West.

In the field of contemporary music, Cappella Romana has taken a leading role in bringing to audiences the vocal works of such European contemporary composers as Michael Adamis, Ivan Moody, Arvo Pärt, and John Tavener, as well as promoting the work of North Americans such as Fr. Sergei Glagolev, Christos Hatzis, Peter Michaelides, and Tikey Zes.

The vocal ensemble presents annual concert series in Portland, Oregon and Seattle, Washington, in addition to touring nationally and internationally. Critics have consistently praised these for their unusual and innovative programming, including numerous world and American premieres. The group regularly collaborates with such artists as conductor Paul Hillier, chant specialist Ioannis Arvanitis, and composer Ivan Moody.

The ensemble is based in Portland, Oregon, in the Pacific Northwest of the United States.

Cappella Romana presents sacred choral music that engages audiences with an experience of music from medieval times as well as by contemporary composers.

A presentation by Cappella Romana is an experience unlike any other classical choral music concert. Each of its events reveal something transcendent. In the space of our performances and our recordings, we bring to the public the music of the common Christian inheritance.

A Cappella Romana performance takes you on a journey of discovery. Some programs feature ancient music never before heard by modern audiences; on other occasions new or rediscovered works are brought to audiences by leading contemporary composers. Our programs create a dynamic experience of immersion in sound and space, tradition and history, innovation and light.

A Matter of Geography

What is the music of the Roman inheritance? In its simplest form, we consider the meeting of East and West and the sacred choral music and chant that was written for it. Our meeting point of musical exploration is within the medieval musical history of (“Old”) Rome and Western Europe, alongside the Byzantine Empire of the Romans in the East centered at Constantinople (“New Rome”) and its Slavic commonwealth.

This music includes Latin Catholic and related music from the West, including Gregorian Chant, the Greek Orthodox (and Byzantine) tradition in the East. The core traditions of this sacred choral music are vocal, with instrumental music based upon it aiming to imitate the human voice. The ancients believed the human voice to be the highest instrument to praise the Divine.

Cappella Romana’s Founder and Artistic Director, Dr. Alexander Lingas, compels listeners to embrace the fascinating transformations of music on the frontiers of East and West. When the Greek East meets the Latin West, when the Slavs meet the European Baroque style, or when a modern composer encounters ancient sources: the resulting encounters create something new and exciting. Animated debate on the nature of cultures, musical influence, musical distinction, identity politics through music, or how music indicates tribe or language, religion or other identity are all played out through sound and voice. Cappella Romana explores the function of music in society and politics in the relations between imperial and ecclesiastical authority, of government and the governed, in theology, and in sociology, with each program drawing out a sense of the transcendent, of deep emotion and spiritual effect

Audiences sense the transcendent in Cappella Romana’s programs, whether by a male-voice choir performing ancient Byzantine chant, or a mixed choir singing Russian Orthodox choral works or more conventional music such as Handel’s Messiah, which it performs annually in collaboration with Portland Baroque Orchestra. With Cappella Romana you can explore esoteric and guttural three-voice chanting from the inner reaches of Georgia, to new works by leading composers, to medieval Byzantine chant from the Sinai Peninsula, to modern works by the late John Tavener.

In addition to exploring the medieval history of Greek Orthodoxy, Roman Catholicism, and the Russian traditions, Cappella Romana encourages the meeting of old and new by performing new works by leading contemporary composers who are inspired by ancient traditions.

In the field of contemporary music, Cappella Romana has taken a leading role in bringing to West Coast audiences the vocal works of such European contemporary composers as Michael Adamis, Ivan Moody, Arvo Pärt, and John Tavener, as well as promoting the work of North Americans such as Fr. Sergei Glagolev, Christos Hatzis, Peter Michaelides, and Tikey Zes.

The ensemble presents annual concert series in Portland, Oregon and Seattle, Washington. Critics have consistently praised these for their unusual and innovative programming, including numerous world and American premieres. The group has also frequently collaborated with such artists as conductor Paul Hillier, chant specialist Ioannis Arvanitis, and contemporary composer Ivan Moody.

Cappella Romana’s exploration of the Roman musical inheritance is unique in the world of music. No other ensemble in the world performs this combination of works, with the ability to shift gears so smoothly from one vocal style (Byzantine chant) to another (choral music in the European tradition, such as Gregorian Chant Music). Journeys to new discoveries in a vast musical landscape await you at Cappella Romana, whose mission to explore the Roman musical inheritance will give you new understanding of the world and our place in it.