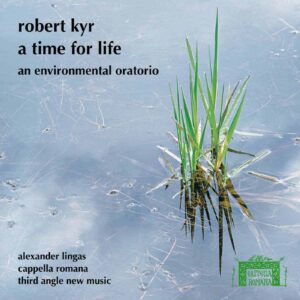 Oregon Arts Watch with a review from our A Time For Life concert in Portland:

“… Kyr’s work really shines in the atmosphere it creates. The very beginning is understated, with strings alone. But as the voices come in, starting with the low tenor, the string harmony starts to take flight. A haunting spirituality arises, not least thanks to those wind chimes, which don’t sound like they’re hanging off anybody’s roof. Instead, they seem to reverberate gently throughout the heavens like a host of wonders. Entering last among the eight voices, the top soprano comes in over arching gestures in the strings and cuts loose, her notes wordlessly floating up and down the harmonic series. The strings join her, echoing and intertwining like waves of the ocean or a powerful river’s flow. Then they build again, with the soprano on a pentatonic scale, and she subsides and undulates sweetly in the background as the starting tenor returns with the final words in praise of Creation. The section reaches its exquisite, final climax as the other singers all enter in overlapping waves, rising and falling in mighty arcs supported by the richness of the strings.

It’s so impressive that you’d be tempted to think the composer and the performers couldn’t possibly top it, but you’d be wrong. After all the hand-wringing, after the howling, after a number almost too ravishing for its subject – “The Joyless Land” – for soprano and two altos in close harmony, after dancing steps back and a series of prayers for guidance, some sense of rejoicing at the beauty of Earth returns. The finale of the Creation section returns, intensified, and the work ends with an exalted duet between the top soprano and the low tenor, the strings ecstatically shimmering up and down perfect fifths, and the host of wind-chiming wonders suffusing throughout. As the soprano fades out into the stratosphere, the tenor softly intones, over and over, “Remember…,” remember to appreciate our great gifts, even after the beauty of the music fades and we’re heading for our transport home.

For music to come across like this, composers and performers need each other, and Cappella Romana’s performance was masterly. Balance and blend were top-notch at all times. It was no surprise to read in the program that seven of the singers were from the original group of eight which Kyr wrote for, and he prides himself on knowing their voices and writing specifically for them.” —Jeff Winslow, Oregon Arts Watch

See the full feature and review at www.orartswatch.org