Byrd Ensemble – Spanish Music for the House of Habsburg

SPANISH MUSIC FOR THE HOUSE OF HABSBURG

The House of Habsburg

The House of Habsburg was an incredible patron of the arts. During its six-century rule, it shaped the arts world like no other dynasty, employing singers and commissioning composers on an international scale. The program features music by the most prominent Spanish Renaissance composers employed by Charles V and Philip II: Victoria, Morales, and Lobo, and the great Counter-Reformation Italian composer Palestrina.

The House of Habsburg was one of the most influential royal houses of Europe. At the height of its power, the dynasty ruled Austria, a vast tract of Central Europe, Spain, the Low Countries, much of South America, and it occupied the throne of the Holy Roman Empire for nearly three centuries. The Habsburgs held the arts in high regard. In the sixteenth century, the power and wealth of a dynasty were expressed through its patronage of art and science. The most important ruler had to demonstrate that he was also an outstanding patron by commissioning and collecting works of art. Artists employed at the court enjoyed a good income, high social standing, and remarkable freedoms, a rarity during period of religious turbulence. The Habsburg who defined Europe in the Renaissance was Charles V (1500-1558), who ruled Spain and its overseas empire and was elected Holy Roman Emperor in 1519.

Music played an important role Charles’s court. Sacred music was sung for the daily services in the court chapel, for special memorial services, marriages and affairs of state that required a solemn ceremony in church. Professional singers and the clergy provided the chapel with music. Members of the court chapel performed many duties, as they were often singer, priest, composer, choirmaster, organist, music teacher, and scribe at the same time. Additionally, the nobility received extensive musical education themselves, often from the members of the court chapel, and learned how to sing and play instruments.

Charles surrounded himself with musicians. In Brussels he had a court chapel of mainly Flemish musicians called the “Capilla Flamenca” which he eventually brought with him to Spain. At his Spanish court Charles formed a larger ensemble, “La Grande Chapelle,” made up of the best musicians from the whole of Europe. The group performed sacred polyphony for voices and eventually secular music with instruments, once it came into style in the late sixteenth century. Charles loved both sacred and secular music.

Composer Cristóbal de Morales (c.1500–1553), a contemporary of Charles, is regarded as the most important Spanish composer before Victoria. The preference by Pope Paul III of employing Spanish singers in the papal chapel choir helped Morales, who moved to Rome in 1535 and joined up. During his time, Morales sang on three occasions for the emperor Charles V and received a commission to write music for Charles’s wedding to Isabella of Portugal in 1526. Morales remained employed by the Vatican until 1545, after which he returned to Spain following a period of unsuccessful job hunting in Italy. While regarded as one of the greatest composers in Europe, he was an unpopular employee and had difficulty keeping his jobs.

Morales was one of the first important contributors to a growing repertoire of musical settings of the liturgy for the dead. His antiphon for the the solemn office, Circumdederunt me, set for five voices, achieves a dark mood through slow-moving polyphony and low ranges. The sound fits the text perfectly:

The groanings of death have encircled me: the sorrows of hell have enclosed me.

His settings of funeral music were disseminated widely across Europe. The Missa pro Defunctis was likely sung in Mexico in 1559 at memorial ceremonies for Emperor Charles V and his son, Philip II of Spain. 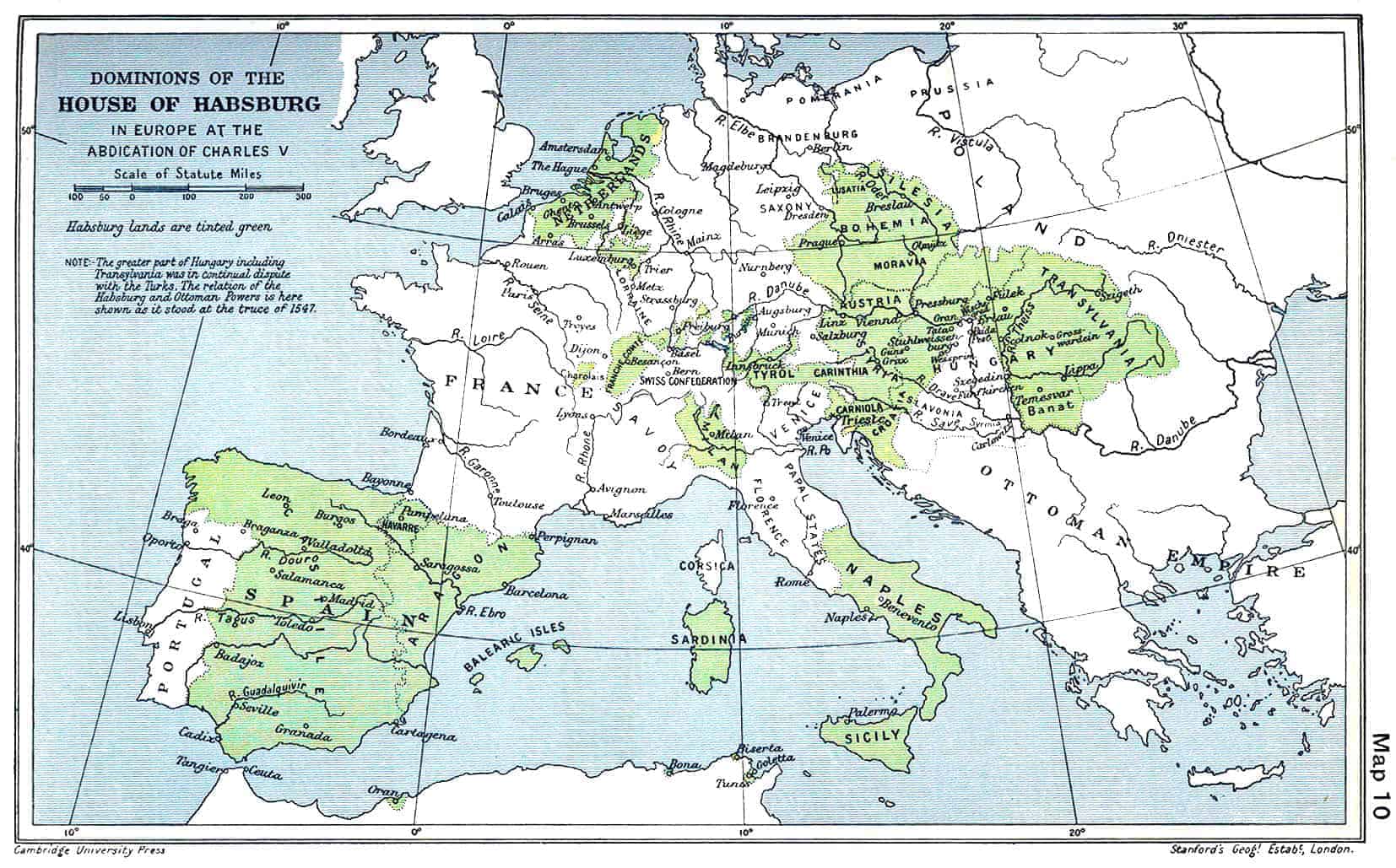 A map of the dominion of the Habsburgs in 1547

Philip II of Spain (1527-1598), “Philip the Prudent,” reigned during the so-called “Golden Age.” At the peak of his influence and power, Philip’s empire included territories on every continent then known to Europeans, including his namesake the Philippine Islands. People described his dominion as “the empire on which the sun never sets.” Unfortunately, his reign also saw the economic decline of Spain and the disastrous decade from 1588-1598 which included the devastating defeat of the Spanish Armada. Philip loved music and was a passionate art patron. He had a wonderful collection of masterpieces at the Escorial, his palace outside of Madrid, and was well educated in History and Politics but poor at languages.

16th-century Spanish music patronage differs from English, French, and Italian music in that the Spanish royal house maintained two royal chapels: the House of Burgundy and the House of Castile. The first was made up of Charles’s and Philip’s Low Countries subjects (Flemish) and the second of Spaniards. Philip’s maintenance of two chapels of singers and players showed an incredible commitment to music, unmatched by his contemporary sovereigns. Philip was also the only monarch of his time who patronized Italian, Spanish, and Flemish composers equally. He was the only patron to whom Palestrina dedicated two books of masses. Philip also helped Spanish composer Guerrero on his first publication, and Victoria dedicated one of his lavish single publications of Magnificats to him in 1563. Philip was the leading international music patron of his age.

Tomás Luis de Victoria (c.1548-1611), the most famous Spanish composer at the time, was one of the most important composers of the Counter-Reformation, along with Giovanni Pierluigi da Palestrina (1525-1594), and Orlando di Lasso. Victoria was not only a composer but also an accomplished organist and Catholic priest. Victoria was sent by Philip in 1565 to prepare for holy orders at the German College in Rome. During this time he likely studied under Palestrina, whom he eventually succeeded as director of music at the Roman Seminary.

The Magnificat, the Canticle of Mary, was the next most important part of the liturgy after the Mass in the 16th-century Catholic Church. It was sung at the close of each day’s service of Vespers: Settings of the Magnificat were in demand. Composers served this liturgical need by publishing a complete set of eight or sixteen settings of the Magnificat, covering eight “tones” or keys. Victoria’s Magnificat primi toni, one of his two polychoral settings, employs eight voices and alternates between fugal sections for one choir and full double choir passages for both choirs. The way Victoria balances imitation and full homophonic statements in his Magnificat is strikingly similar to Palestrina’s techniques in Nunc dimittis for double choir—we can hear why Victoria is called the “Spanish Palestrina.”

In 1578 Philip II honored Victoria’s request to return to his native Spain, where he met the pious dowager empress Maria, sister of Philip, and later became her chaplain. His last work was the Requiem Mass (1605) in memory of the empress Maria, his most famous work. All of the music in the Requiem Mass is scored for six voices, except the initial Taedet animam meam funeral motet (not sung in the program) he also wrote for the occasion. The second soprano part often carries the cantus firmus (a pre-existing melody used as the basis of a polyphonic composition), though it disappears into the other parts. Victoria concludes the Mass with the motet Versa est in luctum, which was probably sung as the clergy and dignitaries assembled around the catafalque, a decorated wooden framework supporting the empress’s coffin.

Philip II died at San Lorenzo in 1598. Alonso Lobo (1555-1617) wrote his best motet, Versa est in luctum, for Philip’s funeral at Toledo Cathedral. While the six-part motet is set to text associated with a Requiem Mass, he did not write a complete Requiem Mass setting. Though not as famous as Victoria, this stunning motet filled with beautiful, cascading lines captures the despair of the text and showcases why Victoria considered him to be an equal.

My harp is turned to grieving and my flute to the voice of those who weep.
Spare me, O Lord, for my days are as nothing.

ABOUT THE BYRD ENSEMBLE

Described as “pure and radiant” (Gramophone), “immensely impressive” (Early Music Review), and “rich, full-voiced, and perfectly blended” (Early Music America), the Byrd Ensemble is garnering international acclaim for its performances and recordings of chamber vocal music, particularly Renaissance polyphony. The Byrd Ensemble, directed by Markdavin Obenza, is a Seattle-based professional ensemble made up of 10 to 12 singers from the Pacific Northwest. The group presents its annual concert series at St. Mark’s Cathedral in Seattle. The Byrd Ensemble is a nonprofit organization.

Since 2004, the ensemble has performed in the greater Seattle area and has toured across the United States presenting concerts for the Gotham Early Music Scene in New York with Peter Phillips (director of the Tallis Scholars) and the Boston Early Music Fringe Series. In 2014, the Byrd Ensemble was one of sixteen groups—the only ensemble from the United States—chosen to sing at the London International A Capella Choir Competition and worked with Peter Phillips, Mark Williams, and John Rutter, who described the ensemble as “a fine group that has achieved an enviable standard of tuning, blend, and ensemble.”

The Byrd Ensemble became part of the Scribe Records label in 2011 and has since produced six records—four of which feature Renaissance polyphony and have been reviewed by major early music publications: Early Music America, Gramophone and Early Music Review. Our Lady: Music from the Peterhouse Partbooks (2011) featured reconstructions by musicologist Nick Sandon of music by lesser-known English Renaissance composers—Pasche, Merbecke, and Ludford—and included two world-premiere recordings. In the Company of William Byrd (2012), Music for the Tudors (2015), and Music of the Renaissance: Italy, England & France (2016) featured more mainstream Renaissance composers Palestrina, Tallis, Sheppard, Byrd, and White. In 2014, the Byrd Ensemble was included in the international edition of Gramophone Magazine for their recording of works by Estonian composer Arvo Pärt.

ARTISTIC DIRECTOR MARKDAVIN OBENZA has dedicated his career to music. In addition to the Byrd Ensemble, Markdavin is also Director and founder of Seattle-based chamber choir Vox16 and Producer for Scribe Records, an independent record label. He is an active freelance singer who performs with the Byrd Ensemble and has performed with the Tudor Choir, Early Music Vancouver, and members of the Tallis Scholars. He is the Director of Choral Music at Trinity Parish Church in Seattle, WA.