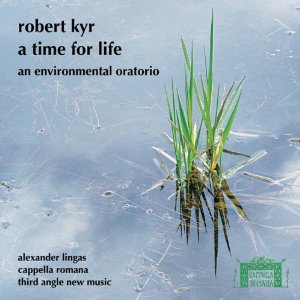 Fanfare Magazine has a grand interview with composer Robert Kyr about his new Cappella Romana CD, A Time For Life. Read an excerpt from the interview, “The Joy of Creation” below and visit the Fanfare Archives for the full piece:

Fanfare: A Time for Life is one of a number of your pieces inspired by issues relating to the natural world. What is it about this subject that you find consistently stimulating? Kyr: Living in the Pacific Northwest, I am very close to nature. My home is about 1,000 feet above the valley where the University of Oregon is located, and around my house, I have 70-foot trees. Essentially, I live in a temperate rainforest. This is but one of the ecosystems in which I’ve lived. I grew up to the west of Cleveland and then pursued all of my studies on the East Coast and in Europe. I taught at the Aspen Music Festival for five summers and did some incredible hiking in the Rockies. I also did seven residencies at the Banff Center for the Arts in the Canadian Rockies. And before moving to the Pacific Northwest, I lived in Southern California and San Francisco at different times. Since 1993, I’ve also spent about four to six weeks every year in the high desert of northwest New Mexico. Thus, I’ve lived in most of the ecosystems in the United States. Living in the Northwest so close to nature has connected me more deeply than ever to this subject. In the other places that I lived, I certainly appreciated nature and had a sense of what is happening to our planet in terms of the environmental crisis. However, it is more evident in the Pacific Northwest where I live much closer to nature. I feel the change in climate very directly, since where I live, it has become progressively colder for most of the year. I also see the effect on the forests of extreme logging (“clear cutting”). We also have pollution from industry and from field burning, and that is of course a concern as well. Any human activity that pollutes nature is felt very profoundly in the Northwest and this is probably why our region is often called “the center of environmental activism.” As an environmental oratorio, A Time for Life is my reaction to the degradation of the ecosystems in which I’ve lived, and my response to what is happening to our world in general through climate change. To a large extent, humanity is causing the environmental crisis through its flawed policies and refusal to find new ways to live in harmony with nature. … Fanfare: As you’ve also done in other works, you assembled a text/libretto that draws on a great many sources, which you reinterpret in your own words. How do you approach the assembling of the texts for these sorts of pieces? Kyr: I’m a writer of what I call “text for music” in that I am both the composer of the music and writer of the text. When I was conceiving A Time for Life, as with many of my projects, there was a substantial amount of research involved. I always begin by simply doing research into a wide variety of possibilities that I know will inform a new piece in some way. At some point in the research process, I begin to feel that it’s time to begin writing. Then, I start to create my “text for music,” meaning that I write the text and music at the same time. Writing music for me is primarily an internal process. I do not write anything on paper until I can hear the whole work from beginning to end, internally and completely. The text and music are thus one entity, and there is no separation between the two of them in my compositional process. That is fundamentally different from a composer who is taking a found text by a poet or writer, and setting it to music. I sometimes call my process “composing text for music,” because it is inextricably bound to the creation of the music itself, and we don’t really have a single word in our language for composing text and music simultaneously. This means that when I begin to notate the music, I’m free to refine and change the text and/or music, whenever necessary. I don’t need to negotiate with another author, so I’m not limited by working with something that cannot be changed. Each composition is a living and fluid being, and it can be refined and transformed during the compositional process. Personally, I find this to be a very exciting way to composer vocal music. It is not static or constrained in any way, but is an open creative process that allows for revision and transformation whenever needed. In A Time for Life, the texts come from a diverse range of sources. One of the great joys of creating the work was to discover that there is a profound connection between the intonations, chants, and prayers of indigenous people and Eastern Orthodox spirituality, especially as it relates to creation, the creator, and nature. This deep connection has never been pointed out before, because scholars have rarely considered those cultures within the same frame. But I found that they share many values related to creation and nature, and artistically, this suggested to me that the dynamic relationship between them could be explored through a work of art. The first part of my environmental oratorio is entitled “Creation” and it is an exploration of creation stories related to the two cultures. The second part is entitled “Forgetting” and it describes humanity’s falling away from creation, through its failure to live in harmony with nature. The third part is entitled “Remembering,” and in it, a hopeful future is imagined, in which humanity serves as a responsible steward of the earth and realigns itself with the creative forces of existence. At the very end of the work, the two soloists sing about remembering our deep connection to nature and embracing the forces of creation. Thus, there is a physical and spiritual journey within the oratorio that moves through the destructive behavior of humanity toward the forces of creation and renewal.