Sun of Justice: A Two-Fold Offering – Part One 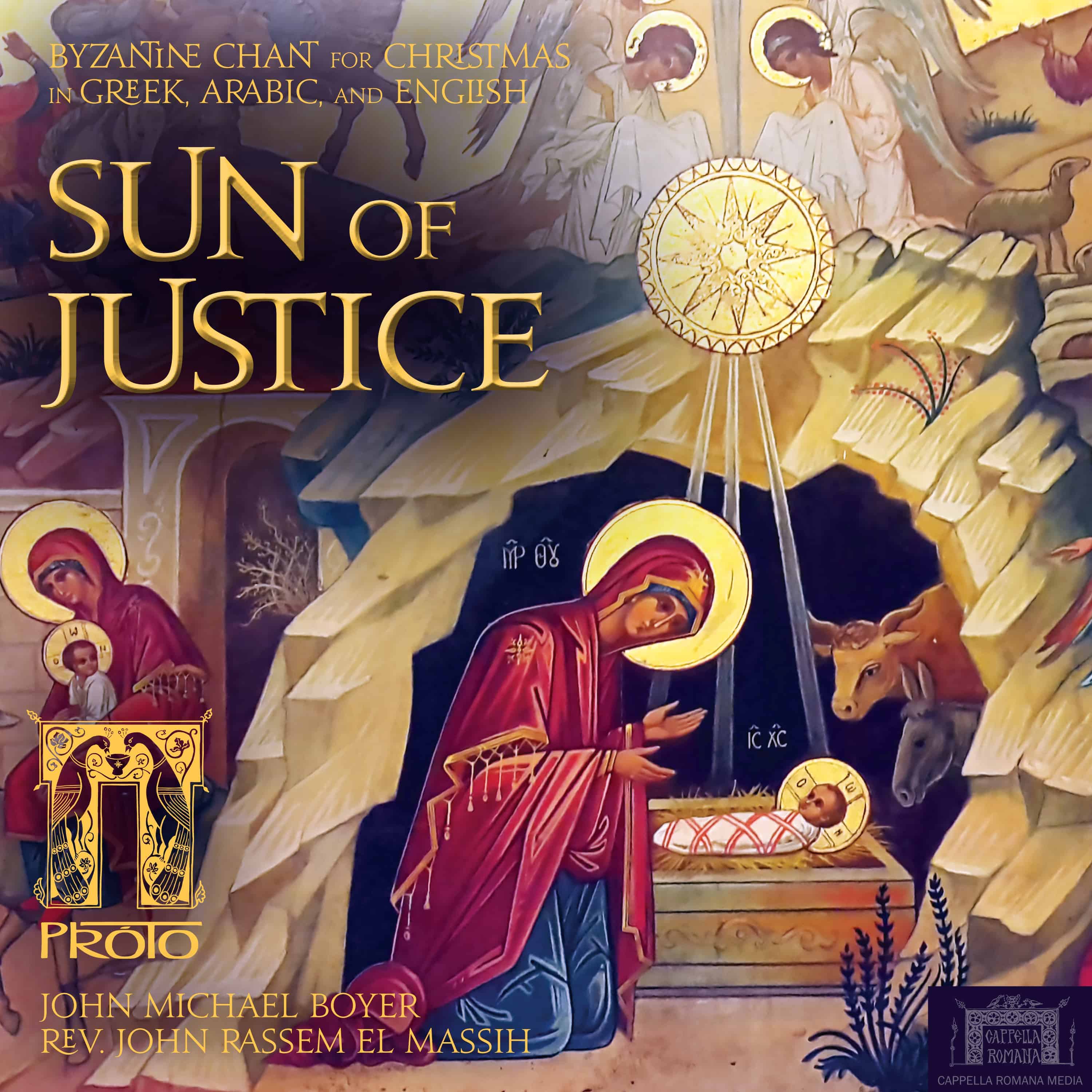 With this two-fold offering of traditional Byzantine Music, we seek to give the listener two distinct yet complementary experiences: first, that of being in a traditional Orthodox church somewhere in the Middle East, wherein one choir sings in Greek and the other in Arabic; and second: that of being in a traditional Orthodox church in the United States with highly trained and proficient chanters singing traditional Byzantine Music in straightforward, clear, properly translated English. The first experience is not uncommon today; the second is less common, but we have hope that it will soon become the liturgical standard—hand-in-hand with the continued development of Byzantine Music in Greek and Arabic—for Orthodox Christian parishes in America. Presented in liturgical sequence, each disc jumps from one moment to another, giving a taste of the entire experience of praying the Great (Royal) Hours on Christmas Eve morning, Vesperal Liturgy on Christmas Eve, and Orthros (Matins) and Divine Liturgy on Christmas morning.

Somewhere in the Middle East…

Not showcasing particularly extravagant or virtuosic music, Disc One of Sun of Justice is a selection of standard, traditional settings of hymns from classical musical sources in both Greek and Arabic. The main source for the material in Greek is the Doxastarion of Petros Peloponnesios, the Archon Lambadarios (leader of the left choir), of the Patriarchal Church of St. George in Constantinople in the mid-18th century. Considered a modern father of Byzantine Music, his “New Sticheraric” genre and texture—simpler and more elegant than much of what came before—became the standard repertoire in the Greek Orthodox Churches from the 18th century on; it also served as the model for how most Byzantine Music would be adapted to other languages. In some cases, there is slight discrepancy between the hymn texts in the Doxastarion and those in the standard Menaion of the Greek Orthodox Church; where they differ, we opted to favor the Doxastarion, as this was clearly what was in use when Petros was composing.

Mitri El Murr, the composer of most of the Arabic selections on this record, emulated and evoked the style of Petros in many ways. He also incorporated some less conservative elements, however: modulations, chromaticism, and some melodic turns all his own; yet his style remains firmly within the received tradition.

In addition to these two main compositional sources, Disc One includes work in Greek by Stephanos the Lambadarios and Ioannis Vyzantios the Protopsaltis, who both emulated the style of Petros into the 19th century; the Monk Chrysostom Agiographos, a composer on Mt. Athos in the early 20th century; and my teacher and friend, Dr. Ioannis Arvanitis, who composed the Prokeimenon at the end of the disc and also the Kalophonic Eirmos which closes Disc Two.

The Arabic melody for the Kontakion is a composition by the Very Reverend Father Romanos Joubran, Dean of St. George Cathedral in Beirut, and emulates the traditional Greek melody beautifully. In addition, our own Deacon John Rassem El Massih took it upon himself to compose both the Prophecy Troparia and the Troparia of Ode I of the Canon; he also masterfully adapted Arvanitis’s melody for the Prokeimenon to the Arabic text. All in all, shifting back and forth between Greek and Arabic feels virtually seamless, and the two languages—as well as their respective melodies—complement each other beautifully.

With performances in Seattle, Portland, Salem, and Sacramento.