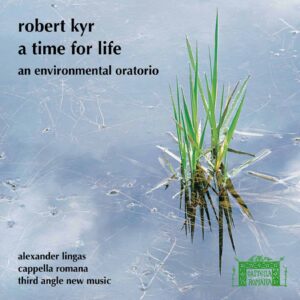 “There can be no questioning Kyr’s skill as a composer. Just listen to the first five minutes, as singers enter one-by-one — there are only eight — to the accompaniment of a single solitary cello. Many writers would need half an orchestra to create the effect Kyr manages with one instrument. Kyr’s vocal style throughout is an ear-pleasing blend of traditional church music and contemporary, tonal, harmony with some really special climaxes: best of all the penultimate track and the “Dance of Life”. I think the best way to describe it is that there’s no doubting this music’s modern origins, but Haydn could listen to it with pleasure. … Speaking of the choir, the Cappella Romana here demonstrates why it has a devoted fan-base in the Pacific Northwest and, via records, across the globe. There is not a weak link or uninteresting voice among these eight singers. The three string players from Third Angle New Music deal superbly with their parts…The booklet includes notes by Kyr and conductor Alexander Lingas, full sung text, and a letter of commendation and congratulation from His All-Holiness Bartholomew, Ecumenical Patriarch of Constantinople.” —Brian Reinhart, MusicWeb International